I am not surprised by it anymore, but it always catches me off guard to have time go by so quickly.  I am still planning a post from our trip to Utah and the Hogle Zoo, but I thought I'd quickly post some photos of things we've been enjoying about fall. 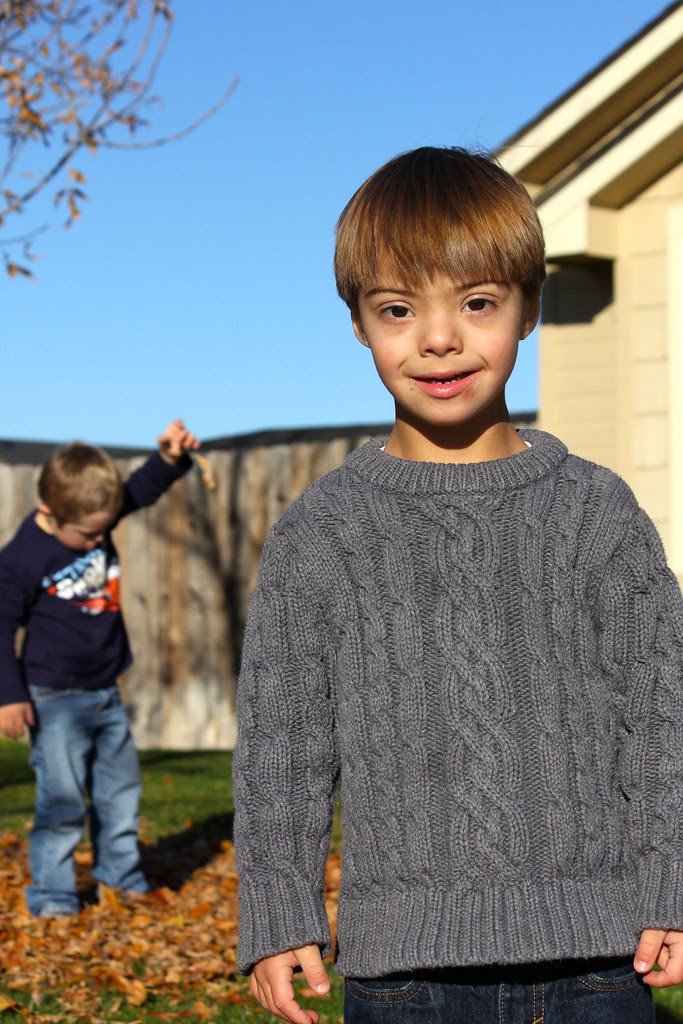 The day after a record-setting rainstorm, I noticed almost all the leaves had fallen from our front trees.  In years past, there were never really enough to make a pile for the kids to play in, but this year the wind hadn't carried them away.  I asked Gabe if he wanted to come outside with me (silly question-he always wants to be outside).  I opened the garage and got out the rake.  Gabe was busy on the tricycle so he didn't really notice what I was doing until I had a small pile collected under the tree.  He brought his bike over and drove right into the middle of the pile, smiling as he "wrecked" the pile.  When he tried to turn and go out of the pile, his bike tipped sideways and he spilled out into the leaves.  His face at first looked like he was going to complain or fuss, but he looked at me and saw my look of "what do you think?!  Do you like the leaves:!" and he broke out into a big smile and laugh.  He then reached down and started grabbing piles of leaves and examining them before tossing them to the side, smiling as he did.  Soon Jake, then Kennedy and Leah saw what I was doing and came running out the door at breakneck speed.  Well, you know what happened next.... 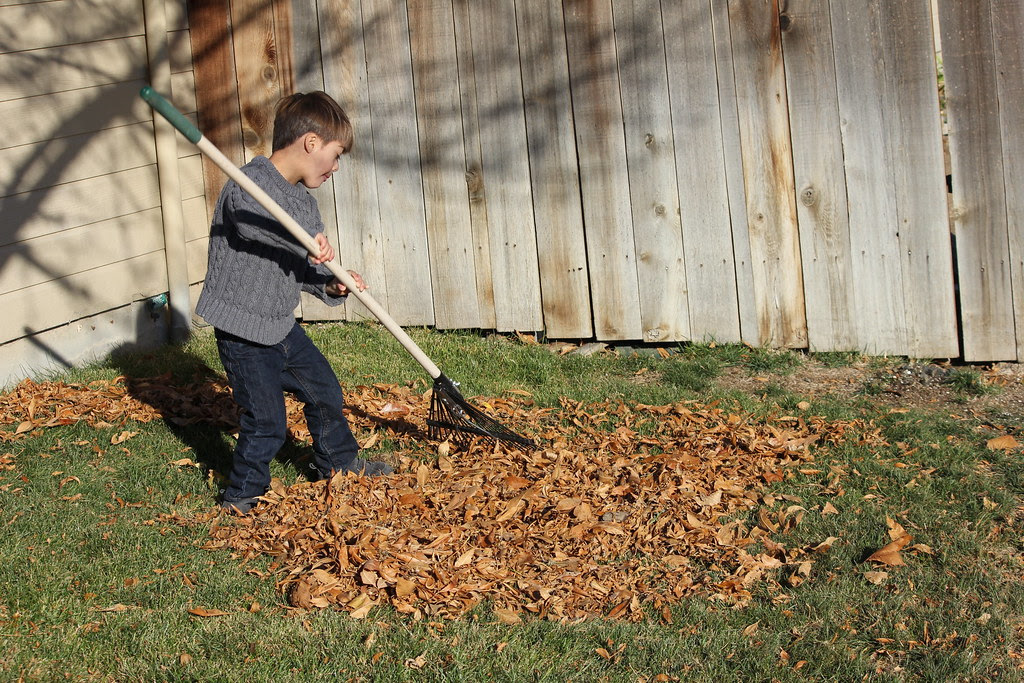 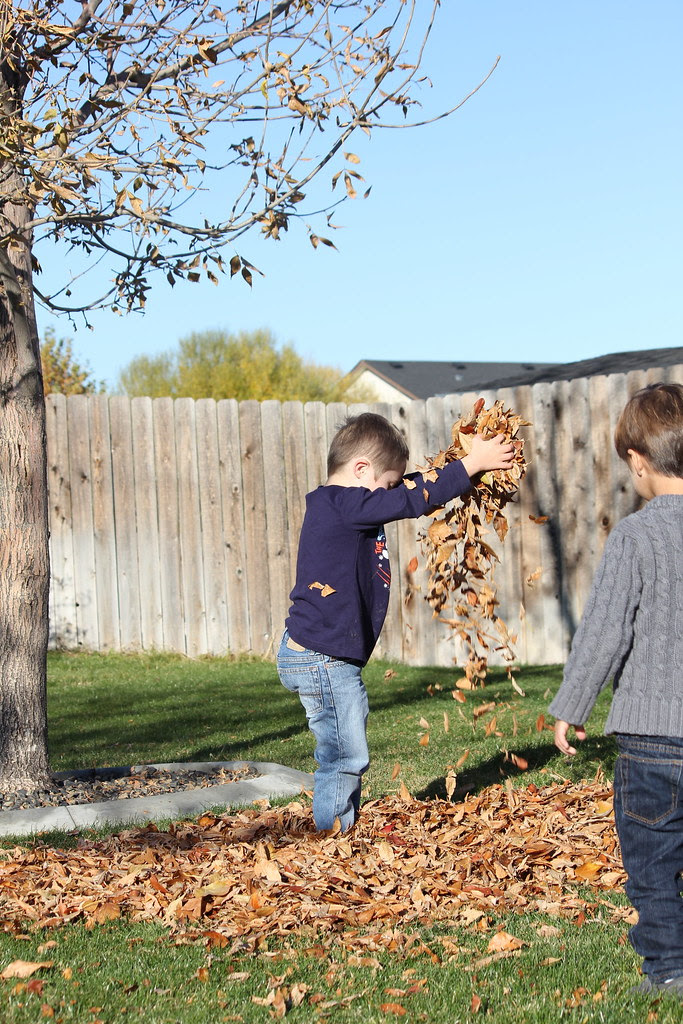 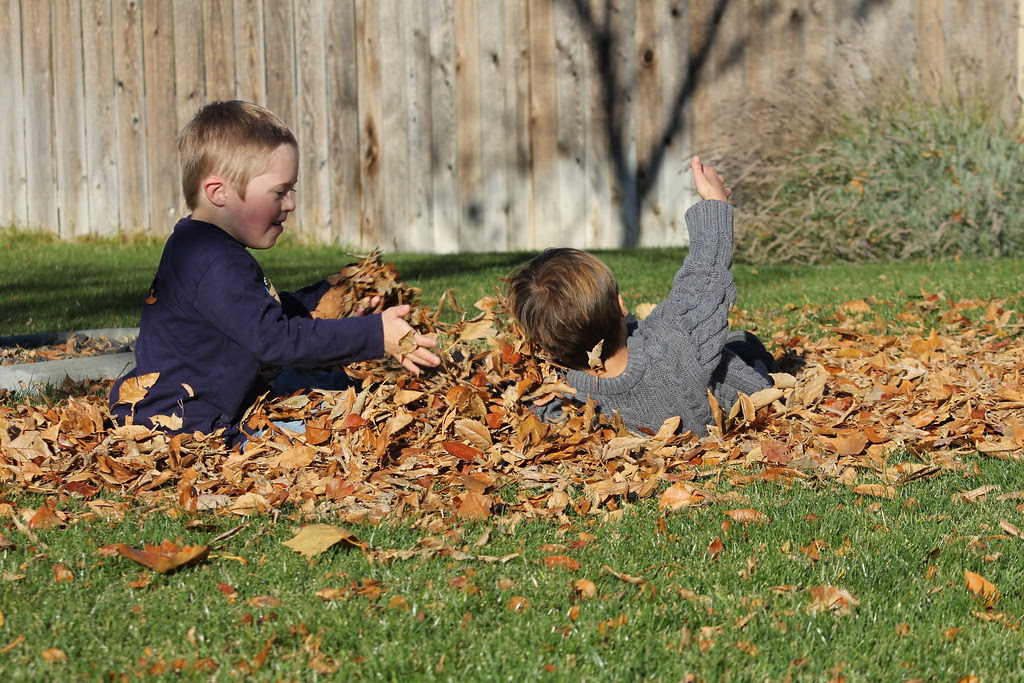 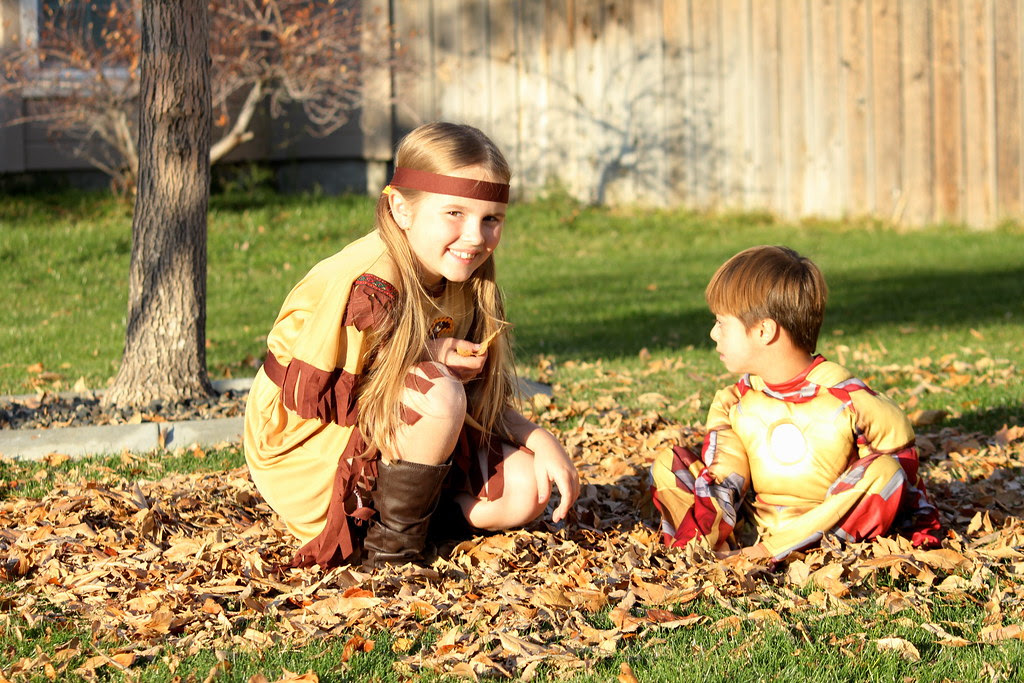 I took the kids shopping for Halloween costumes a couple weeks ago. Jake was determined to be a pirate, and I found a great pirate hat & patch on Darlybird for a great price and snatched it up.  Of course we had to have a sword, so that's what we were after on this trip.  But lo and behold, on Halloween Jake changed his mind and didn't want to be a pirate anymore.  He wanted to be Ironmna like Gabe.  But when we couldn't find his Ironman costume from last year we threw together a cowboy outfit for him.  Leah wanted to be a princess (surprise), and Kennedy wanted to be a Native American.  Gabe was just excited to be looking at all the dress ups, since that's another of his favorite things to do.  When we spotted an Ironman costume with muscles built into it, he grabbed it and declared it his.


I wish I had a photo of Gabe's face when we got home and I put the costume on him to see if it fit right,.  He took one look at those muscles on his arms and chest and just beamed!  He made a big monster pose to show off his muscles and ran through the house growling and being tough.  He felt like such a big kid with all that extra muscle!  His costume came with gloves and a mask, and as soon as he slipped on the gloves he was holding his arms out straight, palms forward, to shoot his laser beams at me. 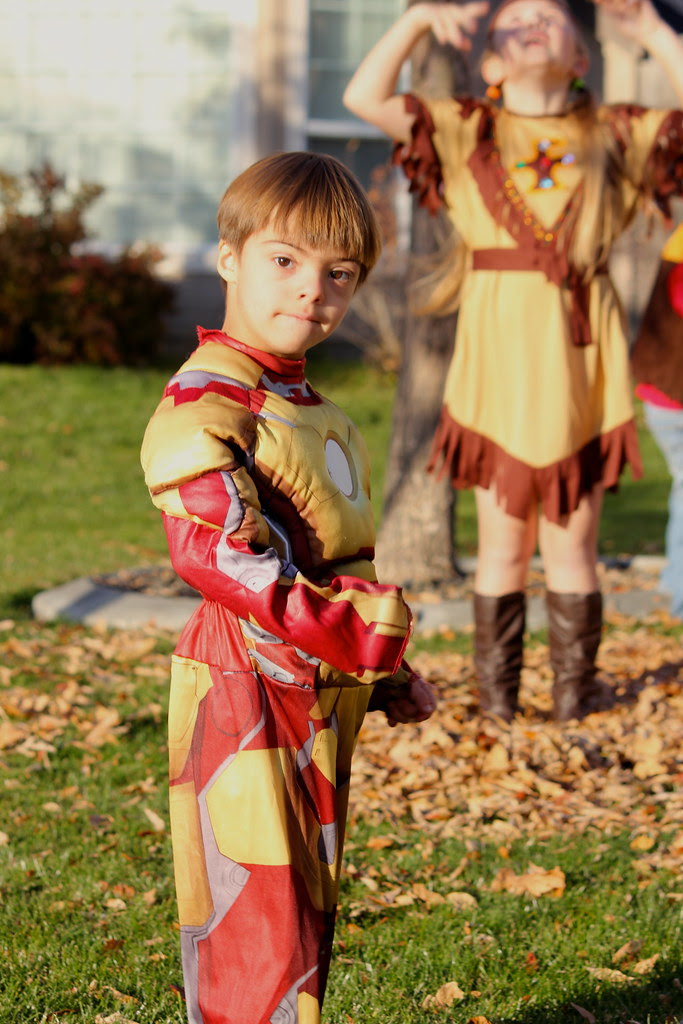 We spent Halloween night with great friends from the neighborhood.  The men took the kids trick-or-treating while we girls baked pizzas and got ready for the troops to come home with their candy.  They came running through the door an hour and a half later with bags full of candy and smiles as wide as the sky. Gabe was so excited to tell me all about it and show me his candy.  Brian said he was so much fun to watch.  He always ran out ahead of the other kids to get to the next door first.  When the people would open their doors, he would poke his head inside their house to look around.  He was especially happy when they had a dog.  What fun memories for Gabe.

The other kids of course had a great time too, and quickly dumped their candy out in piles to compare and trade some.  Now I have to figure out how to ration all this candy!

We have been loving fall, the cooler weather, and especially the colors of the trees and the leaves falling.  I'll be sad when they're all gone and winter arrives.  I don't like to be cold!  I'm so thankful we have a cozy little house and a warm fireplace to snuggle by for the cold and dark winter.  I do hope we get enough snow this year for Gabe to play in and build a snowman with me.  It is such a blessing and honor to watch this boy experience so many "firsts" this year.  It feels like Gabe has always been a part of our family; he just fits.  Sure we have our struggles still, but they are getting less and less, and when I think back to those first couple of months home they seem like nothing at all.  I feel 100% that he is mine.  My love for him has grown immeasurably the past 7 months, and I am happy to know it will only keep growing.

Welcoming life after adopting our son from Moscow, Russia. Feel free to leave a comment or say hello- we'd love to hear from you. You can reach us by email at preece3522@cableone.net